My students have participated in the Hour of Code since it launched in 2013. Regardless of the class I’m teaching (English 8, Digital Design 7/8 or Broadcast Media 7/8), we take a break from our current projects and spend a class period dipping our toes in the waters of computer coding. Thanks to a wide variety of video tutorials provided by the good folks at Code.org, I don’t have to be a coding expert to give my students this opportunity. Even better, the tutorials differentiate the experience for my students, some of whom have been learning to code on their own via Khan Academy, and others who have never heard of coding. Best of all? The online tutorials are all free and continue to be available beyond Computer Science Education Week, which is when Hour of Code is officially held.

Three years later I decided it was time to take my English students beyond just an hour. Our first semester had been devoted to narrative writing, when my students wrote their own novels for National Novel Writing Month. When that project ended on November 30, we had three and a half weeks before winter break and the end of the semester. I decided those weeks would be a great time to go deeper into coding.

Although I am not a gamer, I know enough about games to recognize the link between narratives and games. I asked my students to brainstorm elements of novels (something they had become quite expert in) and elements of games. Eventually they saw these similarities: 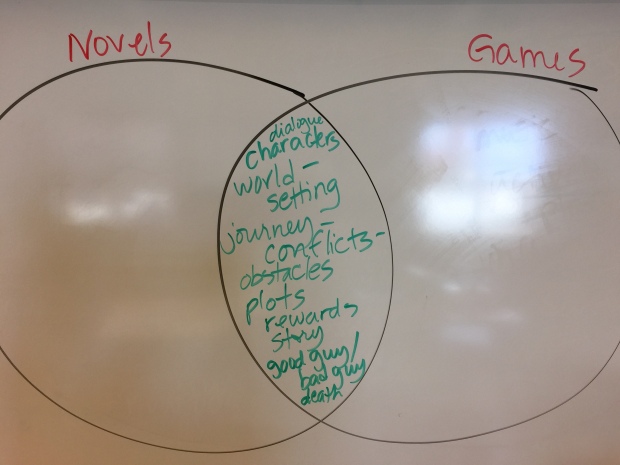 Then I told them about Computer Science Education Week and Code.org’s vision to give “every student in every school the opportunity to learn computer science.” We watched a couple of introductory videos, and then I introduced them to Scratch, the free online coding program launched by creative thinkers at MIT. Using a step-by-step lesson for creating a simple Scratch game, I set my students loose on the Scratch site to get familiar with the drag-and-drop platform that introduces them to the  language and logic of coding. And that’s where Hour of Code would usually end. But I had a better idea… 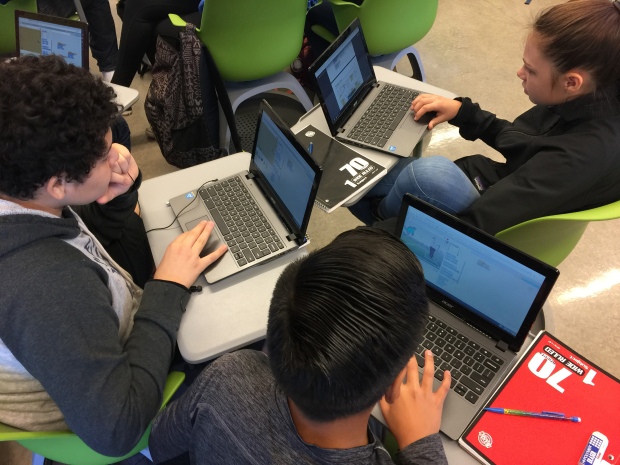 Here’s the assignment I gave them: create a computer game based on the novel you just wrote. Their eyes lit up and their creative juices started flowing. Having just invested over a month into that novel, they knew their characters, plots, and conflicts inside and out. I hoped that the chance to create a game from that story would honor their writing and stretch some different brain muscles, while also giving them the basis for a richer game than they might create if it didn’t come from a well-developed story.

Their enthusiasm was exciting, but I knew many of them were nervous about tackling something as foreign as coding. And that’s where the geniuses at MIT make the significant difference between a one-hour tutorial and an entire unit, semester, or even year of coding instruction possible. I showed my students the many help options on the Scratch site, and told them to please work with friends so they could learn from each other. Each day, as they developed their games, we stopped midway to share out our questions, discoveries, and excitement. With a few weeks to devote to the project, students who thought they were done one day discovered a neighbor who added sound effects to her game, so they were inspired to go back in and do the same. 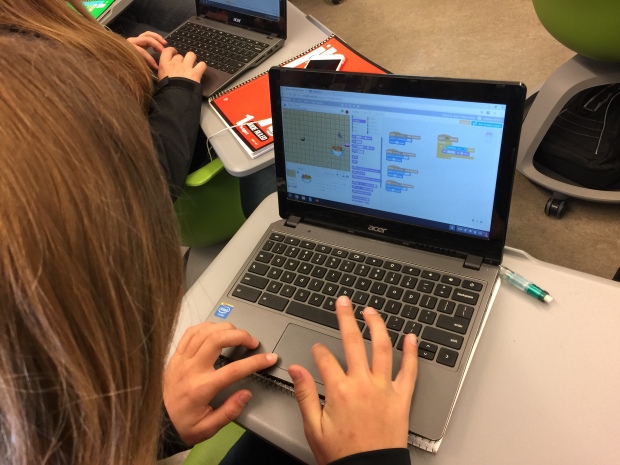 The next week, I gave my students small tasks each day in case they thought their game was done and they were ready to quit. One day they added introductory information on their game info page; another day they traded rough draft feedback with a peer; and another day they updated their online portfolios with reflections on their coding experience and screenshots of their games. Some students had so much fun they chose to stay in at lunch to keep working on their games: 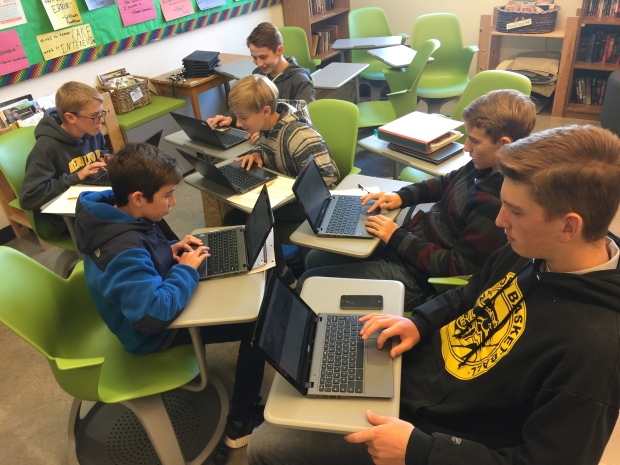 And what will these students be doing on their “final exam” day next week? They will each create a Google Form feedback survey for their game, and then they will post the links to their games and feedback forms on a shared doc. Their work will then be assessed by their peers as they play each other’s games and submit feedback for revision.

There is so much about this project that mirrors the writing process: in addition to creating a story, they brainstormed and outlined their games, drafted them, tested them, found errors to fix, drafted some more, tested some more, revised some more. And eventually they will publish their games to an audience as big as the internet (via the Scratch site), where this creative gaming community can play, rate, and give  them feedback. And if they didn’t proofread their game carefully? It won’t run.

Do I expect all of my students to pursue computer science? Of course not. But will they all benefit from their month of coding? Absolutely. They were immersed in a new language and area of study in a collaborative, student-driven, interactive, face-to-face and online environment. Their narrative skills were sharpened, along with logic and critical thinking, and they got first hand experience in how computer devices are programmed. They saw their work published and learned the value of revision, proofreading, and peer feedback. It was well worth our time to devote weeks, instead of just an hour, to coding.

Have your students gone beyond an #HourOfCode? Have you found a way to integrate coding into your subject area? Please share!